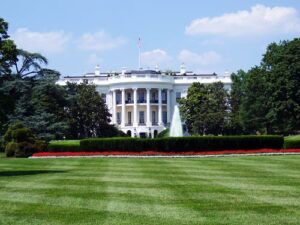 Unfortunately, the White House doesn’t look like this anymore. It stands behind high fences with razor-wire laced along the top. When I went to find a picture of how it looks today, every one refused to load. The excuse I saw on the screen “Unable to load for security reasons.” What a sad day we’re living in.

As I read Levicitus 26 the other day I was struck by the content. At about verse 14 God says if we don’t obey Him and carry out His commands He says in part: I will appoint over you a sudden terror, consumption and fever that will waste away the eyes and cause the soul to pine away; . . . I will set My face against you so that you will be struck down before your enemies; and those who hate you will rule over you, and you will flee when no one is pursuing you.

That is only the beginning of what God promises if we turn our back on Him and His ways. I went through and circled the word “if” all the way through the chapter. If we refuse Him and His ways then He will do more, and more in an effort to turn us back to Him.

After a recent post, a reader commented that last week Rep. Gregory Steube (R-FL) quoted the Bible in the House of Representatives when speaking out against the Equality Act which would increasingly normalize transgenderism and force the government to fund abortions in this nation. Within seconds, Rep. Jerry Nadler (D-NY) interrupted him, explaining that God has no place in the Democrat-controlled Congress. He ended with “God’s will is no concern of this Congress.”

Is it any wonder why many of our legislators suffer terror from non-existent boogey men?

God is calling us to repentance and prayer. Will we respond to Him or will He have to take us to the next level of judgment?