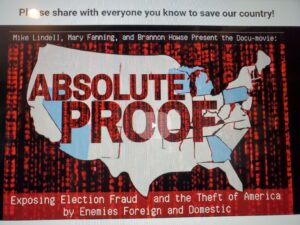 Last Friday the My Pillow guy, Mike Lindell, released a two-hour presentation of facts about the 2020 election. At 1 hour and 38 minutes into the program he is interviewing Mary Fanning, a National Intelligence researcher and author. She shows one of thousands of pages of the actual IP addresses of the computers from China and Iran and many other countries hacking into our tabulation machines all over the United States. Those sheets also show the number of votes moved from Trump’s column to Biden’s. The final tally of those sheets show Trump actually winning the election by 79 million votes to Biden’s 68 million.

Our nation is sorely divided over this truth. This video has since been debunked in the liberal media. No surprise.

Jesus said in Mark 3:25, “If a house is divided against itself, that house will not be able to stand.” That is China’s end goal. In order to bring us down they have to try to defeat us from within. If they try to defeat us from an outward invasion, at this date, we have too many weapons in our homes for that tactic to be successful.

If you would like to check the election numbers out for yourself, go to michaeljlindell.com before they take it and this blog down. At this writing, you have to download the video to your computer rather than it popping up in your feed.

Our free speech, our first amendment right, is being removed. One of my blog’s videos, “Shocking Truth-Call to Action” posted on Jan. 9, 2021 has been removed.

We have no helper but for Allmighty God. He calls those who believe in Him to humble ourselves and pray; to seek His face and turn from our wicked ways, in order for Him to hear from heaven, forgive our sin, and heal our land (2 Chronicles 7:14).

Will you do as God has instructed us?

4 thoughts on “Only One Way Back”