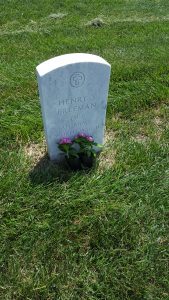 In reading over my dad’s letters written in May of 1945, 73 years ago, they showed that time proved to be extra-stressful. World War II had just ended with Germany, but not Japan. The battle-weary GIs longed to come home. A different rumor flew at least once a day.

Perhaps they would have to go fight on the Japanese front.  If so, would they be allowed to come home on leave first?

There was no rotation like today. When you went to battle, you stayed until the job was done unless you were wounded or killed.

Some like my uncle Charles had been gone for the duration of the war.

Dad and my uncle didn’t get home until October of 1945. The troop ships were loaded with twice the number of passengers they usually carried in order to get soldiers home as soon as possible.

We often forget when the three day Memorial holiday the end of May arrives, to stop and pay homage to those who gave their lives to keep us free. If you would like to read in more depth about this time, pick up “Hard Times in the Heartland” at Amazon.com

My titles are available on Amazon.com here.

God’s Little Miracle Book is now available in audio at https://itunes.apple.com/us/artist/sally-jadlow/1303687606 for iTunes and at Amazon at https://www.amazon.com/-/e/B007F5H0H4