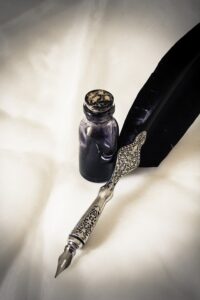 Found poetry is a type of poetry created by taking words, phrases, and sometimes whole passages from other sources and reframing them by making changes in spacing and lines, or by adding or deleting text, thus imparting new meaning. In an article by Larry Tomczak, a board member for Intercessors for America recently titled Do You Know You’re Being Set Up? This is his warning to America. I’ve taken the quote from the Nuremberg Trials and formed it into a found poem without changing the wording. The rest is from Larry Tomczak’s article.

“How Do You Kill 11 Million People?

“New York Times best-selling author Andy Andrews wrote a book with this title. The figure represents the actual number of people killed by Adolf Hitler, not including ordinary civilians and military war dead.

“In the book, he gave a simple answer to the inquiry: You lie to the people and set them up to be led like naïve sheep to the slaughter. It’s happening today.

“When Hitler wrote ‘Mein Kampf’, he stated, ‘The great masses of the people will more easily fall victim to a big lie than a small one.’

“His henchman, Adolph Eichmann, revealed in sworn statements during the Nuremberg trials their deception with the Jewish people. Here’s how they set them up.

“‘All Jews listen up!
At last it can be reported to you
that the Russians are advancing
on our eastern front.
I apologize for the hasty way
we brought you into our protection.
Unfortunately, there was little time to explain.
You have nothing to worry about.
We want only the best for you.
You will leave here shortly
and be sent to very fine places indeed.
You will work there,
your wives will stay at home,
and your children will go to school.
You will have wonderful lives.
We will all be terribly crowded on the trains,
but the journey is short.
Men, please keep families together
and board the rail cars in an orderly manner.
Quickly now, my friends,
we must hurry!’

“Sound familiar? They were set up by the Democratic Socialist regime.
We must speak up before it’s too late.

“Here’s the deal: ‘Live not by lies’ was the warning given us by Russian defector Alexander Solzhenitsyn concerning the dawning post-Christian, pre-totalitarian society he saw emerging in America. Jesus told us to watch (stay alert) and pray (Luke 21:36). Have nothing to do with the fruitless deeds of darkness, but rather expose them. (Ephesians 5:11 NIV)

“To be forewarned is to be forearmed. Don’t take the bait when they make you an offer they think you can’t refuse.”

My books are available from Amazon at https://www.amazon.com/-/e/B007F5H0H4

5 thoughts on “A Found Poem-A Warning”