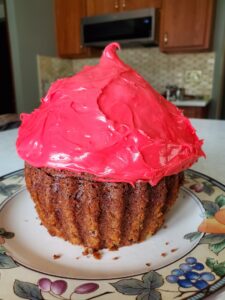 Two of my granddaughters are born on the same date, two years apart. This year I decided to bake them a huge cupcake for their birthday.

Rather than make my traditional chocolate cake I decided to make a carrot cake instead. Rather than grate the carrots, I put them in my new Insta Ace blender (Pictured here.) Wow! In only two pulses I had two cups of chopped carrots.

I pulled out a can of pineapple. The recipe called for chunks. I didn’t have chunks, so into the blender they went. Bam! Instant chunks.

Rather than chop my cup of pecans, I let the blender do it. I think I kinda like this new machine!

Preheat oven to 350 degrees. Grease a 9×13 inch baking pan. Set aside. (In my case I used a special large cupcake pan.)

Bake for 55 minutes or until toothpick inserted into cake comes out clean. Remove from oven, and set aside to cool. For the pan I used, I baked it about 40 minutes.

In a medium mixing bowl, combine butter or margarine, cream cheese, vanilla, and confectioners sugar. Blend until creamy. Frost cake while still in the pan. I let the cake cool completely, then removed it from the pan and iced it. Hint: if you’re going to drive somewhere with the big cupcake, you might want to take it in two pieces and ice it at the destination!

3 thoughts on “A Different Birthday Cake”