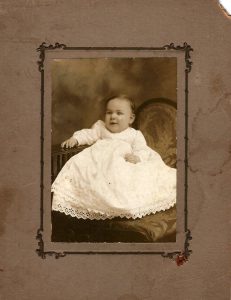 A hundred and sixteen years ago, little boys wore dresses until they were about two years old. Here is a picture of my dad, Henry, at six months.

In his lifetime he lived through WW I, the Roaring 20s, The Depression, WW II, the Korean War and The Vietnam War.

At age ten, a crop-duster pilot flew into a nearby field near my dad’s small town and said he would take one person for a ride. Everyone chipped in to buy a chance. My dad won the lottery. That one ride started him on a lifetime love of flying. When he was 60, he obtained his commercial pilot license. At the time, he was the oldest person in Kansas to ever receive this license. He never actually flew a commercial flight–it was just one of his long-term goals.

I remember the day the U.S. landed on the moon. My husband and I and our children were in the Ozarks with my folks. As my dad drove he kept saying, “I just can’t believe we’ve actually landed on the moon!” Had he been younger, I’m sure he would have been in line to apply to be an astronaut.

A lot has changed in 116 years. At least little boys don’t have to wear dresses anymore!