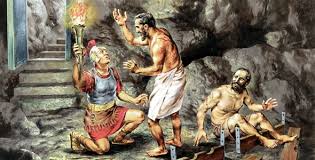 Acts 16:31
And they said, “Believe in the Lord Jesus, and you shall be saved, you and your household.”

Sometimes we wonder why bad things happen. When we belong to Jesus, everything has a purpose—even being thrown in jail.

Paul and Silas had been brought before magistrates for the “sin” of being Jewish. By this time all Jews had been thrown out of Rome and its territories. Philippi was a Roman outpost.

After being beaten with rods, they were thrown into the inmost prison. About midnight while they sang and praised God, there was an earthquake. All the prison doors opened.

The jailer, sure all his prisoners had escaped, prepared to kill himself. Death would be his fate when the officials learned he lost his prisoners. Paul quickly called out that they were all still there.

The man fell down before Paul and Silas and asked what he needed to do to be saved. They responded with the above scripture. That night the jailer and his whole household believed in Jesus and were baptized.

When the sun came up, the magistrates learned their prisoners were Roman citizens. The officials authorized their release and begged them to leave the city quietly because it was illegal to beat a Roman citizen.

Lord Jesus, help me keep my eyes on You
rather than the circumstances
when dark days appear.

To see my books visit http://www.amazon.com/-/e/B007F5H0H4
To view my other blog visit https://familyfavoritesfromtheheartland.wordpress.com/

3 thoughts on “How to be Saved”