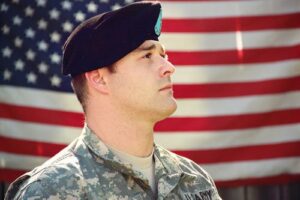 Psalm 91 is known as the Soldier’s Psalm. There are many accounts online attesting to the power of this psalm. Here is one account you might have not have heard from just after WW II found at https://www.magnoliabannernews.com/news/2018/nov/02/psalm-91-gods-shield-protection/#:~:text=I%20will%20say%20of%20the,be%20thy%20shield%20and%20buckler..

“After the war, Secretary of War Henry L. Stimson sent Rickenbacker on a tour of air bases in the Pacific Theater of Operations. He was provided an older B-17D Flying Fortress.

The B-17 left Hawaii and strayed hundreds of miles off course while on its way to a refueling stop on Canton Island. When their estimated arrival time came, there was no land in sight. They were forced to ditch in a remote and little-traveled part of the Central Pacific Ocean.

Miraculously, the plane stayed upright long enough to allow the crew of eight men to get into three small rubber rafts. The only had eight oranges, and no water.

“During the following days the sun burned the men, and at night they would almost freeze. The rafts were tied together. A private on the crew had a Bible in his pocket.

On day 2 they started morning and evening prayer meetings. They took turns reading Bible passages. They confessed their utmost secrets and sins to God. There were initially some non-believers, but not after day 8.

“They prayed for deliverance. Within an hour a sea gull landed on Rickenbacker’s head, and he was able to catch it, they picked and ate it, then caught two fish with the entrails. It rained that night and they had fresh water.

On day 24, American planes found and rescued them. All their needs were met and they all became believers in the power of God and Psalm 91.”

It is noted in the New American Standard Bible as “Security of the One Who Trusts in the Lord.” All the promises therein are for those who trust the Lord and stay close to Him.

Like some of the men above, they knew about God, but still had not placed their trust, their full reliance, in the One who gave believers precious promises until they saw God’s word in action.

God’s Word is living and active according to Hebrews 4:12. His promises are true for those who place their trust in Him. Psalm 91 is a great place to start discovering God’s faithfulness.