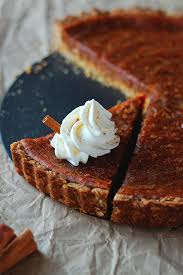 My daughter, who doesn’t like pumpkin pie, tried this and said it was the best she’s ever eaten.

A decadent veganized version of classic pumpkin pie served with luxurious coconut whipped cream! To allow for optimal cooking and cooling time, this pie is best baked the day before you plan to eat it.

Instructions
Pie Filling + Oat Crisp Crust
1. Preheat your oven to 300F.
2. In a medium-large bowl whisk together all of the filling ingredients. Refrigerate for 15 minutes while you work on the crust.
3. Combine all of the crust ingredients. Use your hands or a pastry blender to break up the vegan butter into pea-sized or smaller pieces. Squeeze a little bit of dough in your hand to see if it holds together. Add a few teaspoons of water if it’s too dry.
4. Drop about ¾ of the dough into your pie plate (I used a 10″ non-stick tart pan.) Use your fingers to evenly press the dough flat. Use the remaining ¼ of the dough to build the crust up the sides by about ¾”. Try to avoid making the corners too thick.
5. Bake the crust at 300F for 10 minutes.
6. After the crust has baked, pour the filling into the crust and use a spatula to even out the surface. Bake for 1 hour and 40 minutes, or until the small cracks form around the outer edges of the fillings and the center is dry to the touch.
7. Let the pie cool at room temperature before chilling in the refrigerator.
8. Serve with coconut whipped cream!
Coconut Whipped Cream
1. Simply place your canned coconut cream in the fridge until well chilled. Then, turn the can upside down and open the “bottom” of the can. With good quality coconut cream, half of the can should be a thick coconut milk and the other half should be a thick, dense layer of coconut cream.
2. Scoop the thick cream into a bowl, add a dash of vanilla extract and 2 tbsp maple syrup.
3. Whip on high until light and fluffy.

In case you’re looking for a great devotional book for the new year or a wonderful historical fiction, check them out here in paperback and e-reader.
Looking Deeper at Amazon.com.